3DFinance: Organovo (ONVO) wants to print you a new organ

So as part to the blog I am interested not only in the technical side of 3D printing, but also the financial side and so I will be writing at least a post a week (every Saturday) that has to do with how 3D printing stocks are performing and my (unprofessional) assessment of their potential.

This week I am highlighting Organovo Holdings, Inc. (ONVO) a development stage company that is developing the technology to print organs using a culture of a patients own cells. This blog has actually already touched on a little of Organovo's work, the company that is working on 3D printed meat, Modern Meadow's co-founder Gabor Forgacs was also a co-founder of Organovo and a lot of the tech is the same. They only recently started trading (back in February) on the over the counter market and aren't even on the larger exchanges. This means that they aren't exactly established, and rightly so, currently they do not have much of a revenue stream as they are still working on the technology. 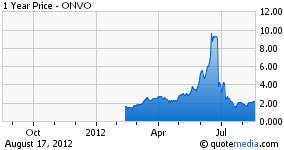 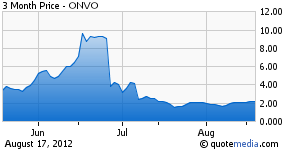 Any investment in this stock would almost certainly be pure speculation, as it is very early, but also with potentially great payoffs. Currently trading around the $2 mark the stock seems to be recovering after the rollercoaster that was its opening. The stock skyrocketed from $2 when it was first issued to $10 over a couple of months as the press-hype and buzz got people excited about the project, the stock then plummeted after people began to realize that they will not be able to print themselves new livers tomorrow (talk about a bad hang-over) but will have to wait upwards of 10 years for it to be more wide-spread. Some of the drop was also attributed to the fact that those preferential investors that bought stocks for cheap on private placements were finally able to sell off those stock and flooded the market. With expectations of the time-line for production starting to settle in the price is again starting to creep up again. I feel that the height that was reached before the crash reflects some of the potential for what the market would value this technology at if it was fully functional and so if Organovo is successful I would not be surprised if it returns to that level.

There are sure to be large fluctuations in this stock over the years, but as they accumulate more patents and develop their technology I would say it is not a bad investment purely for the intellectual property. I can see a Pfizer (or some other medical powerhouse) buying them out in a couple years with potential good payoff for Organovo's investors if all is going well.

Disclosure: I have no positions in any stocks mentioned above. I am not a finance professional and before you blow away your savings on my advice consult real financial professionals
Posted by Ayal Chen-Zion at 1:55 PM