What WikiWeapons means for America 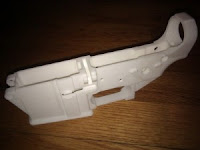 The other day I posted a link to a story about a man who printed the main component of an AR-15 on a 3D printer (See pictures above), well recently this idea has spread and given birth to a project titled WikiWeapons by a group called Defense Distributed. This group is raising money to develop the 3D printing blueprints for complete weapons.


If any issue is going to bring 3D printing to center stage in the political arena it is this one. At stake is the future of both second amendment rights (the right to bear arms) and intellectual property rights (a constant issue in 3D printing) in the 3D economy.

As with much technology, once the idea has been created it cannot be uncreated (except for zip drives, I think those have officially been wiped from history). This new method of acquiring guns can be seen by some as a sign of the inevitability of mini-militia and some sort of apocalyptic future, but it can also be taken as an opportunity to shift the techniques we use to deal with these kinds of issues. Prevention is impossible and so what is left is figuring out how our society will be able to function when getting a gun becomes a lot easier. Here are some suggestions:

-Transition from a concentration on preventing weapons proliferation to an emphasis on low-level preventative security at community gathering places like malls, public transportation centers, etc.

-Provide some method of certification of safety for different blueprints, so that there are not widespread accidents involving faulty equipment from badly designed blueprints.

-Inform law enforcement world-wide, so that by the time these weapons become readily available they are prepared.

While the technology cannot be stopped, the best that can be done is establishing the safest way possible that it can be allowed to exist. The 3D printing community will certainly be torn as the debate about what to do about WikiWeapons continues, but as the world begins to take note of this project it is important that those in the 3D printing community remind everyone about the immense good that the 3D economy will bring, I promise that I will.

My suggestions above are surely not exhaustive, I would be happy to hear your thoughts in the comments and maybe together we can start a conversation that will need to happen:
Posted by Ayal Chen-Zion at 11:21 AM